Results of The Hard Work

The construction work of the Salpa-line began at the end of April 1940. At the coastal village of Virolahti, called Ravijoki, the work was started by a voluntary group of 900 men from Sweden. They brought all the machines they needed and quite lot of money, actually 10 per cent of the whole expences. Swedish workers returned back after few months. The machines and money was left in use of Finns.

The construction was at its highest level in March 1941. Then there were almost 35 000 men working. About 2 000 women worked at supply duties.

The work was interruptied in June 1941, when the Continuation War began. The Finns advanced far forward east and so the fortifying far in rear was not topical. The work restarted in the summer 1944, when the Soviets began their gigantic attack to beat finally the Finnish army and tried to occupy the whole country. But as we know now, they failed.

In the Salpa-line there are about 720 reinforced concrete bunkers and some tunnel caves quarried into rocks. The bunkers were built for positions of weapons and of course for men as shelters and accommodation.

For instance, for the building of one massive soil founded bunker altogether about 10 000 tons different kinds of material as timber, steel, concrete, stones and soil had to be transfered. In those days it should meant about three thousand truckloads, more than 3 000 kg material in each.

The roofs of the bunkers were built to bear the bull´s eye hit of a one ton airbomb.

The price of a bunker was 1941 about one million marks. It was something same as a very luxury famile house. For instance in 1941 Salpa-line costs took five per cent of the state budjet.

About 95 per cent of the concrete bunkers are situated between the Gulf of Finland and Lake Saimaa. As we remember it was the strongest part of the fortification and the part which Mannerheim regarded as the most dangerous.

In the defence line there are over 200 km stone antitank obstacles, about 400 000 single stones. The weight of each is three tons. When they transported the stones, the truck could carry only one peace at a time. So there are 400 000 truckloads of stones in the antitank barriers of Salpa-line.

There were also 130 km dug ditch antitank excavations. Trenches, dug with shovels or quarried into rock, were made for about 350 kilometres.

One very essential part of the Salpa-line is the work for the many field fortifications, which are difficult to see anymore. The number of accommodation dugouts made from timber, soil and stones was 700, machine gun strongpoints 1 250, gun positions 500 and artillery fire control positions 400 peaces. Barbed wire obstacles were made about 300 kilometres.

There were no battles at Salpa-line. For all that they say that it had a great meaning for the result of the war. The Salpa-line was built for as a lock of Finnish defence and that was a fact which the Soviets knew.

The fortification has succeeded in its work best, when it is not needed.

I think that for us, for Finns, the Salpa-line is the symbol of hard work, independence, freedom and most of all - peace.
Lähettänyt Terho Ahonen Miehikkälä klo 8.36 2 kommenttia: 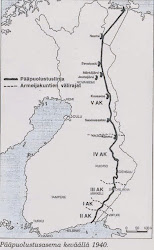 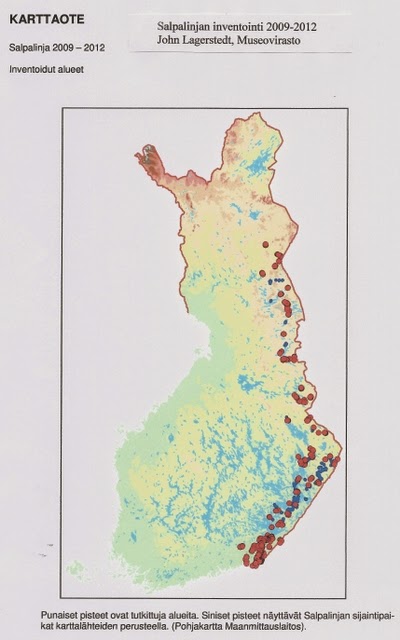